Present this coupon at America's Incredible Pizza company and Get a 99 cent All-You-Can-Eat Buffet with an $18 Game Card Purchase Not valid with any other offer or discount. Can not be used …
View

My family got the privilege of trying out Incredible Pizza of Memphis for free. I was sent a special blogger's coupon that covered our meals and some bonus cards to play games. My kids were SO excited as they have been hearing about Incredible Pizza from all of their friends. I really wasn't sure what to expect but I was game for the trip. We happened to be taking a little family vacay with my mom and stepdad to Memphis so that was the perfect time to try it out!

We didn't have any trouble finding it. As you can see the building stands out!

The kids were so excited that they didn't want to stand still for a picture but I made them anyway. :) 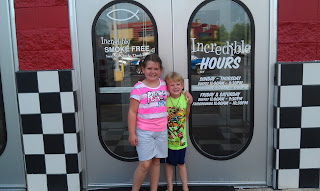 We went on in and the kids began to "ooh" and "ahh." The cashier was very friendly and when she had a little trouble with my special coupon another employee came over and assisted her. We were ready to dive in! I was so impressed to see this sign prominently posted: 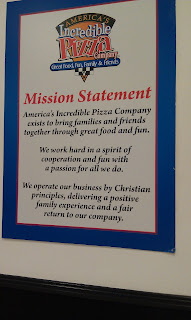 The buffet was so big! There was a salad section, a taco/ nacho section, baked potatoes, veggies, pizza, and dessert! There was a slushie machine and several soda stations. We piled high some plates and went into the Diner seating area. There are 4 seating areas at Incredible Pizza Memphis. The Diner, the Family Room, the Gymnasium, and the Drive In. There was a movie showing in the Drive In and the kids wanted to sit there but most of the tables were reserved for a big group that was coming in so we went to the Diner instead. As we ate we discussed some other fun seating areas that they could have like a beach/ fishing theme, a rustic cabin, a theme park or carnival theme, etc. I think they really could do a lot more with the themed seating areas.

Once we picked our table we headed for the buffets. On closer inspection there weren't many pizzas out at that time. We did see a sign to create your own pizza. My mom attempted to do that but they happened to be pulling one of the ones she wanted out at the exact same time. She did say several were sitting in a window ready to be put out. With so many empty places on the buffet I'm not sure why they weren't putting them out quicker. However we found plenty to eat. The cheesy bread cut into pizza shaped slices were everyone's favorite! Apple also enjoyed a loaded baked potato she built on the bar. The pizza was decent. For the regular price, the pizza and all the extras were well worth it. After 2 plates of pizza and extras (did I mention the green beans were fabulous?), we went for the dessert bar. OH.MY.WORD! The fresh baked, hot cookies were the BEST. Peanut butter and chocolate chip were available and they went great with the ice cream that was included. Of course we had to have some slushies too.
After that we were full and the kids were over the top excited to go to the game room area. Now this isn't your typical arcade. Not only were there TONS of video games, there was mini golf, laser tag, indoor go carts, bumper cars, and more. We tried everything except the laser tag. Honestly we really wanted to do laser tag too but the price wasn't clearly displayed and I never got around to asking the cost. Apple BEGGED to do the golf carts until her Papaw finally agreed to go with her. She had so much fun. That was her favorite part of the hours we spent there. 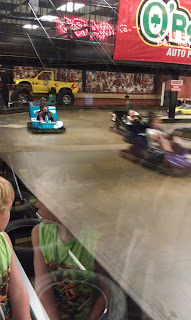 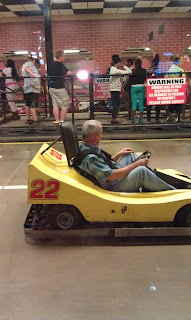 Speedy LOVED the bumper cars. He had the best time ramming his sister and anyone else that was there. He also enjoyed the car and motorcycle video games. 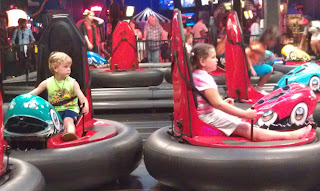 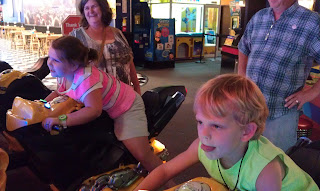 One thing we all loved was the virtual ride machine. There was always a short line for it and each of us rode it several times. I tried the jet and old abandoned mine. They were both fun rides! 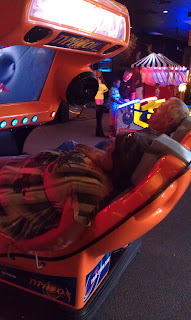 We also all enjoyed a round of mini golf. It was totally free the night we were there although I think there is normally a charge. 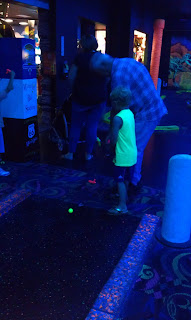 I have a bunch of pictures but I'm sure you can tell from these what a great time was had by all! We were there around 4 hours total. After playing we stopped by the prize area but we didn't have many tickets so the kids picked some candy. We stopped by the slushie machine for a treat before leaving.
All in all we had a fantastic time! The bathrooms were clean but a few of the faucets weren't working. They had the SUPER LOUD hand dryers so Speedy didn't want to go back in. Incredible Pizza of Memphis offers food and fun for all ages. They have discounted prices for seniors and they offer daily specials during the week. There were also party rooms for birthdays! I would totally recommend Incredible Pizza of Memphis to any family looking for a fun excursion. Before you go take a moment to play their spin to win game for your chance at a free buffet, prize points, or other prizes!
I was so grateful for the free buffets and play cards I received in exchange for my honest review from Incredible Pizza of Memphis and US Family Guide. All opinions and pictures are my own and I was not required to write a positive review.
Leave a Comment
submit a review Join our blog team
More Reviews of America's Incredible Pizza Company