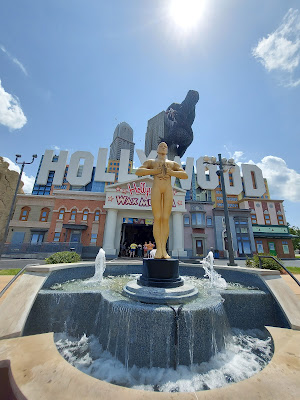 Disclosure: My family received complimentary tickets to visit the Hollywood Wax Museum Entertainment Center, but everything in this review is 100% my own opinion.
If you have seen any of my blog posts, Instagram, or Facebook in the last couple of weeks, you may know that we just went to visit family, and then spend a few days in Branson Missouri.
One Branson location that we were the most excited to visit is the Hollywood Wax Museum Entertainment Center.  It has four different attractions for one great price with the All Access Pass. You can pay to see each attraction individually too, but if you are visiting more than one, the pass is a much better deal.  The biggest and probably most popular attraction is the wax museum. 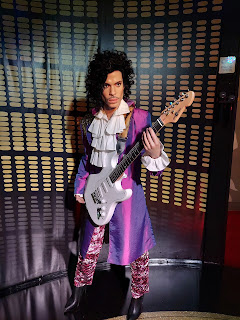 We decided to go to see the museum right away, and we were not disappointed.  When you walk into the museum the first thing you notice is a large ape breaking through a wall where you will have the first of many photo ops.  They take your picture with your entire group, which you will have the opportunity to purchase at the end of the tour. As soon as you enter the museum you are greeted with wax figures. You are allowed to get up and personal with the figures, and take as many pictures are you would like.  There are even photo props you can use in several locations.  There was only one rule though, do not touch the figures.  We had a lot of fun posing with the celebrities, and taking pictures.  I was surprised with how tall so many of the celebrities are in real life.  Of course, most people seem tall to me being barely over 5 feet.  :)  I know the figures were true to size.  I was face to face with Prince, and Kevin Hart who are close to my height.  John Cena, Chris Hemsworth, Chris Pratt and Ryan Reynolds though all towered over me.   We will definitely have some fun memories of our time touring the museum. 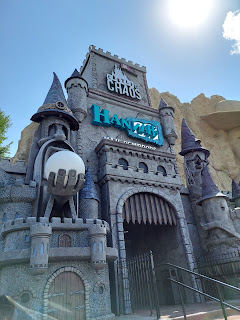 Our next stop was at the end of the center where the Castle of Chaos and Hannah's Maze of Mirrors was located.  We decided to go into the Maze of Mirrors first.  As soon as we entered we were greeted with the story of Princess Hannah and why she needed to be saved in the maze by the King and Queen. 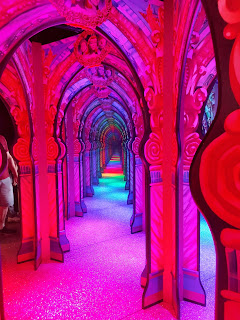 The maze was so pretty, and it was not easy finding our way through at first.  Once we got our bearings though, we were able to save Hannah.   It was then time to go to the Castle of Chaos.  We were with older kids, and they are both gamers so they were very excited to try out the 5D adventure interactive shooting games.  We had to choose which adventure we wanted to try, in both games our mission would be saving the world.  We were seated in a room in gaming chairs with seatbelts. Each person had a special laser shooter that we aimed at the screen while the chairs moved. Shooting at the screen while moving was a blast, and fun for all ages.  We all really enjoyed the gaming experience 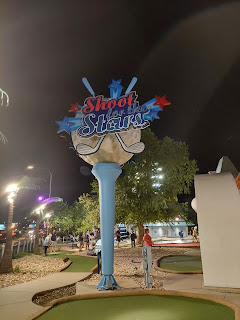 It was very hot the week we were in Branson.  It was 100 degrees out when we finished the other three activities.  It was just too hot to play the Shoot for the Stars putt putt game in the midday heat.  Since we found out that the entire Entertainment Center was open late, we decided to go back and play at night.  We are so glad we did. We really enjoyed playing on this course. Over the 18 holes we were treated like stars, and even walked the red carpet at the Oscars.  At the end of the game you found out if you were overexposed, trendy, famous or legendary.  I especially liked this hole, because I was the only one in our group who was legendary!

We really enjoyed our time at the Hollywood Wax Museum Entertainment Center and highly recommend visiting it if you are ever in Branson.   You can find out even more information at www.BransonWaxFun.com.
https://www.pamspartyandpracticaltips.com/2022/08/our-visit-to-hollywood-wax-museum.html
Leave a Comment
submit a review Join our blog team
More Reviews of Hollywood Wax Museum